Board member since June 2018 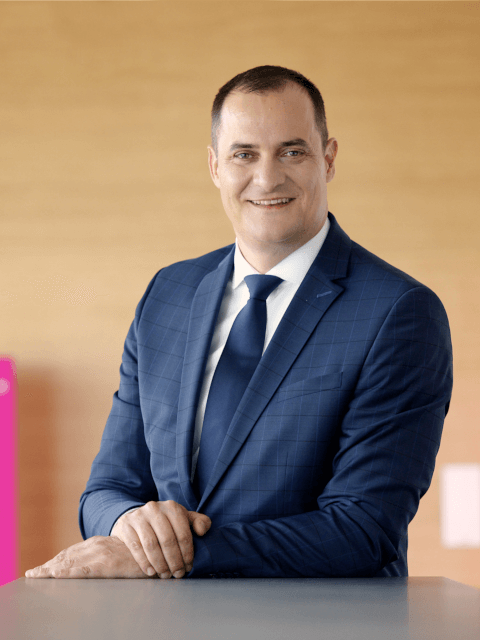 Tibor Rékasi (born in 1973) graduated from the Budapest Foreign Trade College, and then participated in additional business trainings to expand his business knowledge. He started his professional career at Integra Kft as account manager. From 1997 he worked for Unisys Hungary as a relationship manager dealing financial business partners and then as Director for Customer Relations. In 2000 he joined Cisco Systems Hungary where first he worked as Key Account Manager and then as Director of the Large Corporations Business Unit. In February 2007 he was appointed as Managing Director of Cisco Systems Hungary, and in this position, he was responsible for the coordination of all domestic sales activities in addition to the operative management of the company. He joined the Magyar Telekom Group in September 2008 as Managing Director of IQSYS Zrt., a subsidiary of the Business Services Business Unit, where he took on the responsibilities of Commercial Director in addition to leading IQSYS Zrt. Between December 2010 and May 2011, he also acted temporarily as Head of Magyar Telekom’s Business Services Business Unit (T-Systems), while continuing his work as Managing Director of IQSYS Zrt. From October 2012 until September 30, 2013, he was the chief officer responsible for the Sales Division of T-Systems Magyarország Zrt. From October 1, 2013 he has been Chief Commercial Officer Enterprise of Magyar Telekom and Chief Executive Officer of T-Systems Magyarország Zrt. With effect from January 11, 2017 Tibor Rékasi has been Magyar Telekom’s Chief Commercial Officer Residential.

As of July 1, 2018, he is the Chief Executive Officer of Magyar Telekom.

Corporate Governance
Board of Directors